Top 10 Best Cement In India With Price Per Bag

Cement is an important component of urban architecture. It’s used to manufacture concrete and mortar, as well as to safeguard infrastructure by holding the building blocks together.

There are a number of cement manufacturers in India. But when it comes to construction, you must use the best cement brand in India.  In this blog, we answer the most important question: Which is the best cement in India?

The commonly used material in the manufacture of cement is

One of the most significant building materials is cement, which is a binding material that sets and hardens to cling to building components like stones, bricks, and tiles. Cement is a finely powdered substance formed primarily of bauxite (aluminum), iron ore, limestone (calcium), and sand or clay (silicon). It can also contain blast furnace slag, chalk, clay, marl, shale, shells, and slate.

In cement manufacturing factories, raw materials are transformed and heated to create a rock-hard material, which is subsequently crushed into a fine powder and marketed. When cement is mixed with water, a chemical reaction occurs, forming a paste that sets and hardens to link separate building elements structures.

Here’s a list of the 10 best cement in India for house construction:

Let’s find out what makes these companies, the best cement brand in India. Associate Cement Companies Limited, popularly known as ACC Cement is one of India’s leading cement producers and is headquartered in Mumbai. Founded in 1936, it now has a pan-India operating and marketing presence and is a significant participant in the Indian building materials business.

ACC owns and operates 17 separate cement-producing facilities across the country and became the first cement manufacturer to make an environmental commitment. The company operates 12 manufacturing facilities in India and produces the best quality cement in India using cutting-edge technologies. Ambuja Cements Limited, formerly Gujarat Ambuja Cement Limited is one of the best cement companies in India that has been in operation for almost 40 years.

Even though the administrative management of Ambuja Cements was purchased from Holcim, a global cement giant, in 2006, Ambuja Cement has its headquarters in Mumbai, Maharashtra.

Ambuja Cement now has a production capacity of more than 29.65 MTPA. The company does, in fact, produce high-quality cement using innovative procedures and equipment. Binani Cement, founded in 1996 and headquartered in Mumbai, operates with quality, strength, reliability, performance, and consistency values that have helped it become one of India’s greatest cement brands.

Binani Cement is a well-known cement company in India, with a global capacity of 11.25 million tonnes per year with integrated plants in India and China, as well as grinding units in Dubai. Binani Cement Company has only one integrated facility in China, which produces PPC cement in grades 33 and 43.

In northern India and western India, the Binani Cement Company has an outstanding reputation and a significant market share. The MP Birla Group of Companies owns another prominent cement company in the country, Birla Cement. The company was founded in the early 1890s with its headquarters in Kolkata. In 1918, the company began producing cement. In addition to cement, the corporation has a substantial presence in healthcare, jute, steel, and education.

Birla Cement has around ten manufacturing sites producing some of the best quality cement in India. They have a variety of cement options, including

Birla Samrat Cement is ideal for mass concrete, prefabricated structures, and concrete with exceptional waterproofing and resistance to alkali and sulfated soil reactions. The company has its headquarters in New Delhi and operates as Dalmia Cement (Bharat) Ltd, a wholly-owned subsidiary of Dalmia Bharat Ltd.

Dalmia Cement has a 35.9 MnT per annum (MTPA) manufacturing capacity spread among 14 cement factories and grinding facilities in ten states. Cement generating plants with a capacity of 9 million tonnes per annum are located in Tamil Nadu and Andhra Pradesh (Kadapa).

The organization now serves 22+ states, mostly in eastern, north-eastern, and south-eastern India, and is a major presence in every region where it operates. Purchases and greenfield developments have been critical for the company in order to scale the operations and grow into new geographies.

Dalmia Cement is the only business with at least one factory in each of West Bengal, Bihar, Jharkhand, and Odisha, the four main eastern states. India Cements Limited is a cement producer in the country. Founded in 1946 by S. N. N. Sankaralinga Iyer, the first plant was built in Thalaiyuthu, Tamil Nadu, three years later.

It operates seven integrated cement plants and two grinding plants, with a combined capacity of 15.5 million tonnes per year. The Jaypee Group is one of the best cement companies in India based in Noida. Jaiprakash Gaur, who is involved in a well-diversified infrastructure with business interests in design and engineering, power, cement, education (non-profit), property investment, major highways, information and technology, sports, and hospitality business, founded Jaypee Cement.

The company’s cement factories are located in the Satna Cluster (M.P.), which is home to one of India’s fastest-growing cement generations. Under the brand name Jaypee Cement, the company produces an excellent blend of Pozzolana Cement (generally called PPC) and Portland cement. J.K. Cement Limited, commonly known as JK Cement is among Northern India’s leading cement producers. J.K. Cement is one of the country’s biggest manufacturers, with an established grey cement capacity of 10.5 MnTPA. It is also India’s second-largest white cement producer, with a production capacity of 600,000 tonnes per year. This makes JK Cement the best white cement in India.

The company produces Ordinary Portland Cement grey cement (popularly known as OPC Cement) in grades 53, 43, and 33, as well as Portland Pozzolana Cement (known as PPC) under white and grey cement. JK Water-resistant is another JK Cements product that can be used for flooring, walls, and other special purposes. 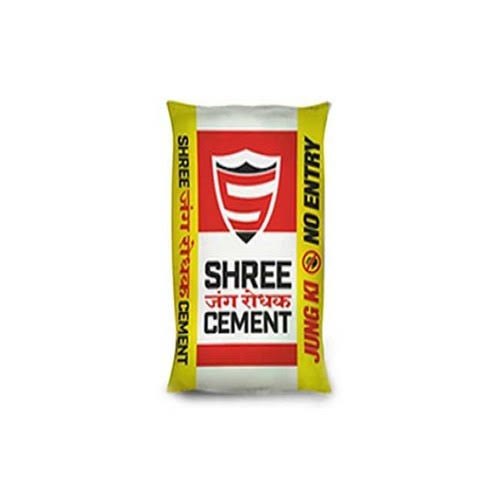 Shree Cement has been engaged in the process of sustainable, inclusive growth since its inception in 1979. This has been made possible by cultivating a culture that values continual improvement, innovative thinking, care, and cooperation as a means of achieving operational efficiencies in product lines, procedures, and individuals. UltraTech Cement Limited is India’s largest cement manufacturer and one of the world’s top cement producers. The company’s total capacity for grey cement is 119.95 million tonnes per annum (MTPA). UltraTech is well-known in global markets such as the United Arab Emirates, Sri Lanka, and Bahrain.

Best Cement Brand in India with Price per Bag

Here’s a quick summary of the best cement in India with price per bag and annual revenue in 2022:

Cement is the most important raw material in the construction of your home. The longevity and structural integrity of your home is directly related to the quality of the cement you choose.

Building your own home can be a very rewarding experience. If you’re building a house for the first time, you’ll have a lot of questions, such as what the structure should look like, what kind of designs to seek, what kind of raw materials to use, and so on.

As a result, it’s critical that you choose all of your raw materials, including the best cement in India.

1. Which is the best cement in India?

Here’s a list of the 10 best cement in India for house construction:

2. Which is the best cement in India for house construction?

Birla Cement has around ten manufacturing sites producing some of the best quality cement in India. They have a variety of cement options, including Birla Samrat Cement is ideal for mass concrete, prefabricated structures, and concrete with exceptional waterproofing and resistance to alkali and sulfated soil reactions.

3. Is JK Cement the best quality cement in India?